The Night We Almost Died In Austria

Wow that’s a statement! But really, we had a scary encounter the last time we were in Austria. Like pee your pants scary. Here’s my story….

We decided to have a nice dinner at a restaurant nearby. It was along one of the trails behind the apartment were staying at in Innsbruck. This apartment was situated on the outskirts of town. Right when we arrived, the property manager showed us a hiking trail that led up from right outside the apartment and explained that there were two restaurants along the trails. One was known for having really good food. So, we decided to check that one out and take Juno along as well. The weather was really nice, and it was only about a 40 minute walk to get to this restaurant. So we get there and eat an amazing dinner, all the while watching the sunset between the mountains surrounding us. This sounds like a nice story so far, and it was up until this point. This restaurant was housed at a farm as well, so much of the ingredients used were grown and produced right there! Anyway, we are eating and realizing that hey, it’s getting really dark out and we have to walk all the way back along the trail through the mountains in Austria. No big deal, right? Right…

After dinner is over and we are walking outside, we realize just how dark it is outside. Since we are up in the mountains we don’t have any light coming in from the city and the moon was apparently in hiding that night as well. So, without many options, we start walking back through the trail in the woods. This immediately seemed like a horrible idea. I pulled out my rinky dink prepaid handy and turned on the flashlight option to at least get a little light so we could make sure we were staying on the path. I’m telling you, it was pitch black. Our eyes couldn’t adjust because there was no light at all to adjust to! So we are walking, and my husband is telling me how creepy the woods are at night, and then I start thinking about all of the possible things hiding in the woods. Normal things like werewolves and polar bears were coming to mind. Right, normal stuff.

We were about 10 minutes into our walk when TJ says “Hey, do you see that?” I am notorious for looking down when I walk, I normally am trying to not trip and fall when it’s light out so when it’s dark, especially this dark, I really look at the ground! And again, the only light source was from my little phone and it really wasn’t doing too much. So I look up and see it too, a white figure, a blob, presumably an elusive polar bear (what else could it be) about 40 meters in front of us. And then we heard the branches crack and the ground make noise, and then the white thing wasn’t moving anymore. We stared at it. TJ was trying to walk closer to see what it was. As noted earlier, I was convinced it had to be a polar bear or the biggest wolf in the world. This thing was too big to be a dog but probably too small to be a cow. We were stumped. So it stood there staring at us (I’m guessing from the lack of movement) and we stood there staring at it trying to figure out what to do next. 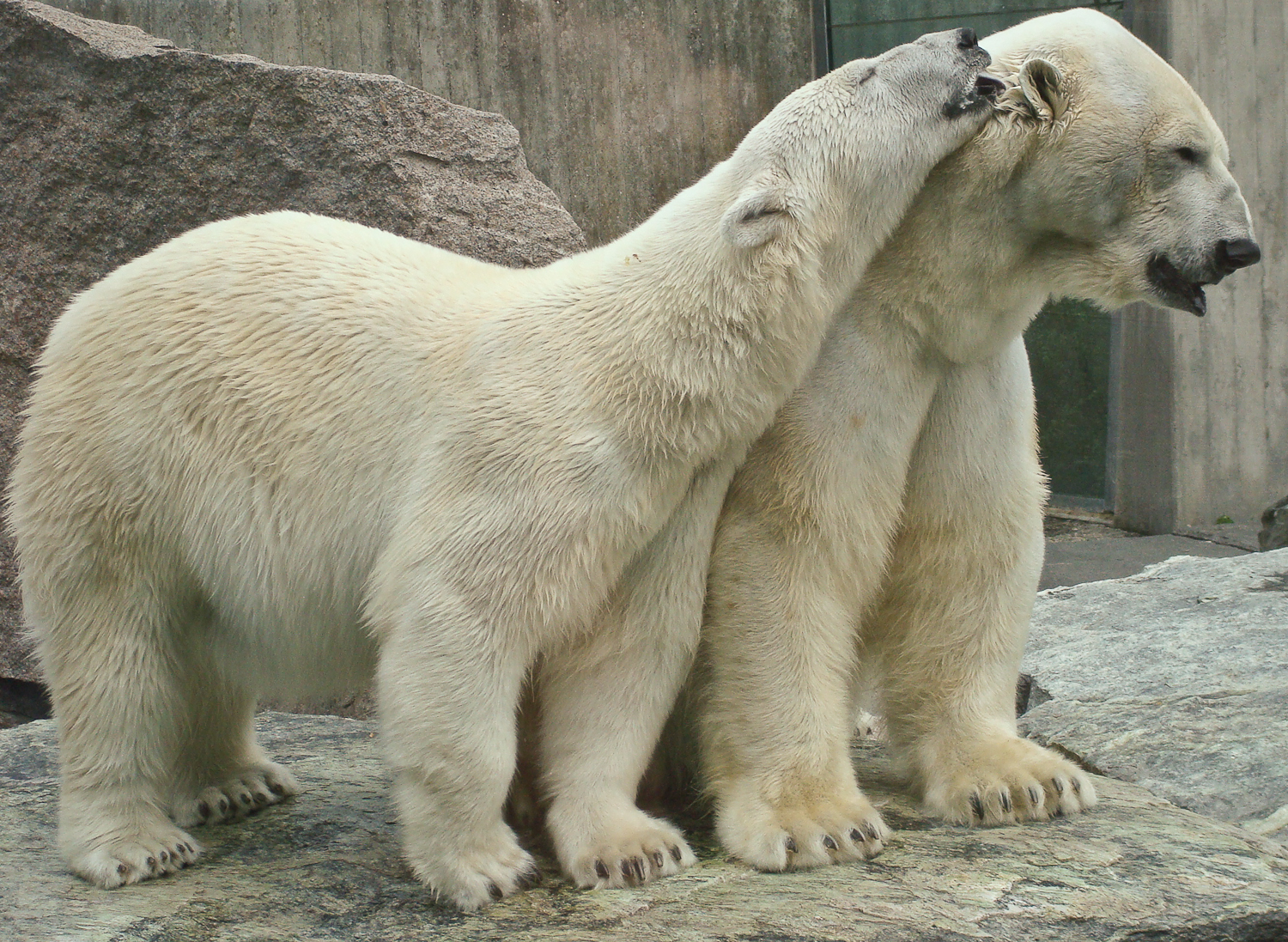 Oh look how sweet they are. Too bad they’re ferocious beasts that that are waiting to eat you. I’m fairly positive this is what was waiting in the woods for us. Okay, not really, but still…

Well it was about at that point I decided we needed to beat feet and go in the absolute opposite direction. There was no way I was going to find out what that white thing was and I decided I was about done walking through the woods. So we quickly decided to just turn around and go the other way. By that I mean I turned around and in a hushed whisper told my husband that we needed to go, now. Luckily when I turned around there was another side trail that was possibly a short cut to a road or civilization. We decided to take that, but apparently that wasn’t good enough for me. I was imagining that the white blob of a polar bear/werewolf was about to start bounding after us and the most logical thing to do would be to make a beeline into the field below where there was some light from a house nearby. So that’s what we did. Probably not the best choice but it helped us get to the road and be able to see a little bit better! The downside was that this field was made for grazing cattle, so the terrain was not friendly.

We ended up walking along a muddy path looking for an escape because there were big pointy fences all around us. We followed a fence until we reached a house nearby, and had to hop up over the wall/fence area to get to someone’s driveway. Luckily none of these fences were electric! The whole time Juno was hopping around thinking we were playing some game. In hindsight, I don’t know that whatever was in the woods would’ve harmed us since our dog wasn’t scared, but sometimes she doesn’t pay attention to things until she runs right into it. I didn’t want to take that risk either. I like my life. Once I was over the fence, TJ handed me the dog who was all limbs everywhere because she likes to squirm and move as much as possible when you pick her up. Then TJ jumped over. Phew! We survived! I think we both looked at each other and gave a ‘well that was a dumb idea’ look. Thankfully, everything was ok save our now mud covered pants and shoes. Once we reached the end of the driveway we could see the trail we had been on earlier lead right along to the house we were at. TJ wanted to stay on the trail…so in hindsight that probably would’ve been a smarter idea. Oops. I think I desparately wanted to have some sort of light so we could at least defend ourselves when the beast decided to attack us.

We will never know what was in the woods that night. I think the more logical explanation is that it was a cow or some type of cattle animal that had gotten loose. The only problem with this is that almost all the cows have bells on them, I think partly just in case they get lost. I don’t think it was a wolf either because it probably would’ve attacked Juno, or at the very least scared her. Not to mention that this thing was white, very white. That’s all we could see, a fuzzy white blob and nothing else. No lines to even make out a shape. There aren’t too many wild animals in the woods in Austria, I checked! Guess we will never know what scared us out of the woods that night, but I think I’m ok with that.

OMG! What a night! So glad you all are ok!

49 Amazing Photos of Iceland to...