After staying in Lake Garda for a few days, we were ready to head out for our next adventure two hours east in one of the most popular tourist places in the world; Venice.

The drive along the Italian highway was nice and I was surprised that our German BMW wasn’t too big for the Italian roads. In fact, I thought the highways were wider in Italy than in Germany! When we arrived we planned to park outside of Venice since everything I had researched said that trying to drive into Venice was a pain and, up to a certain point, impossible. The parking garage we found was only 4 Euro per day to park. We found a bus stop nearby and hopped on. 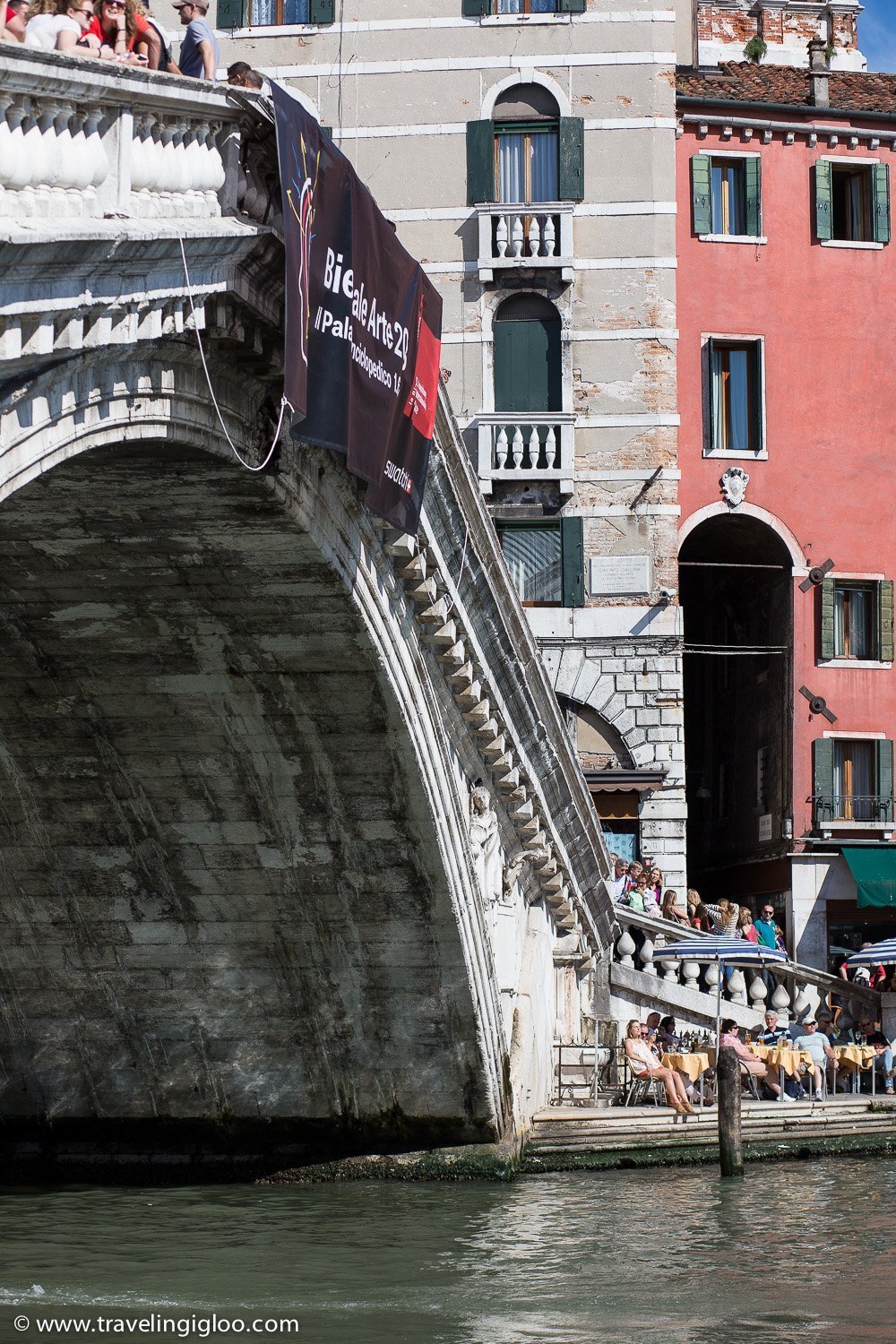 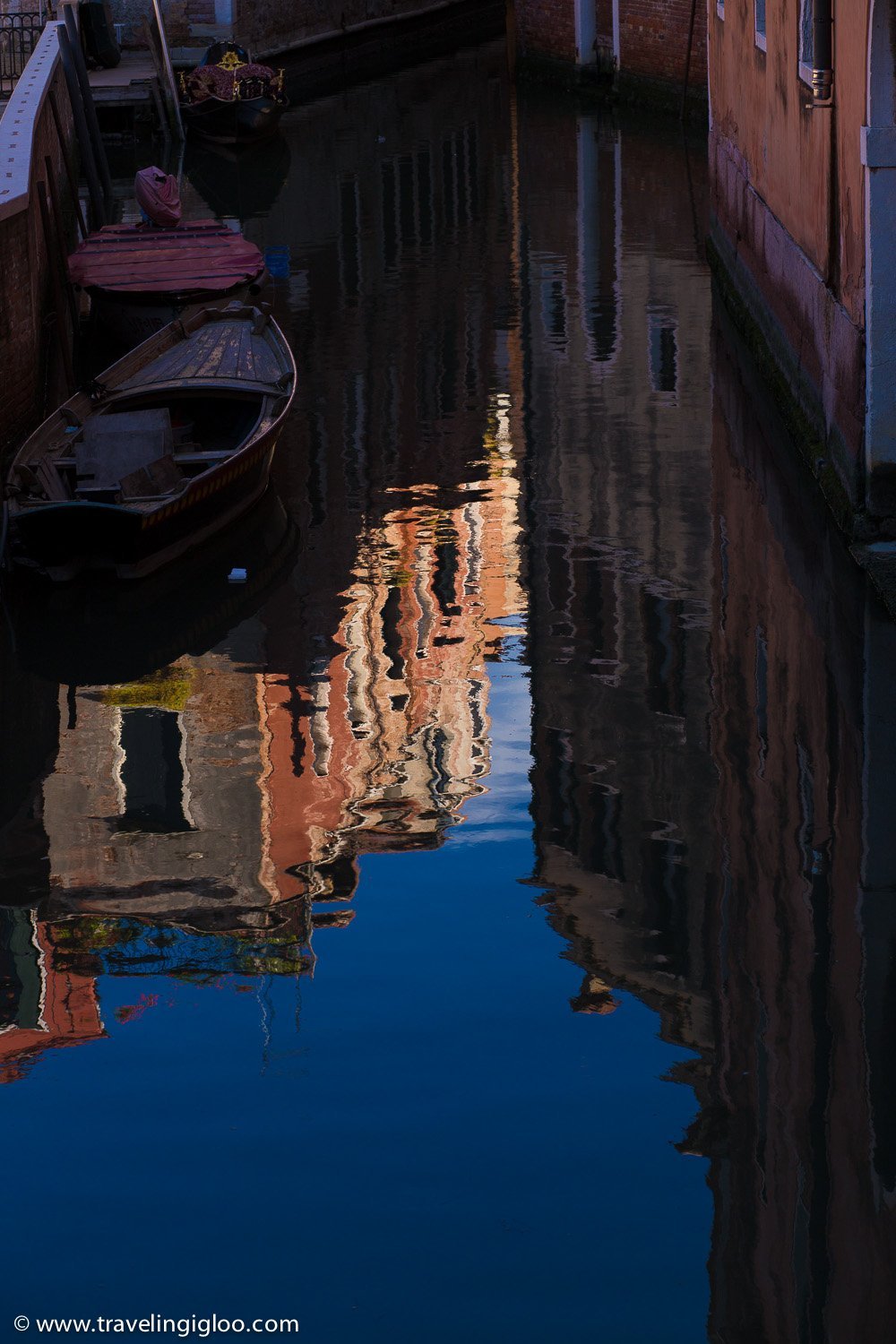 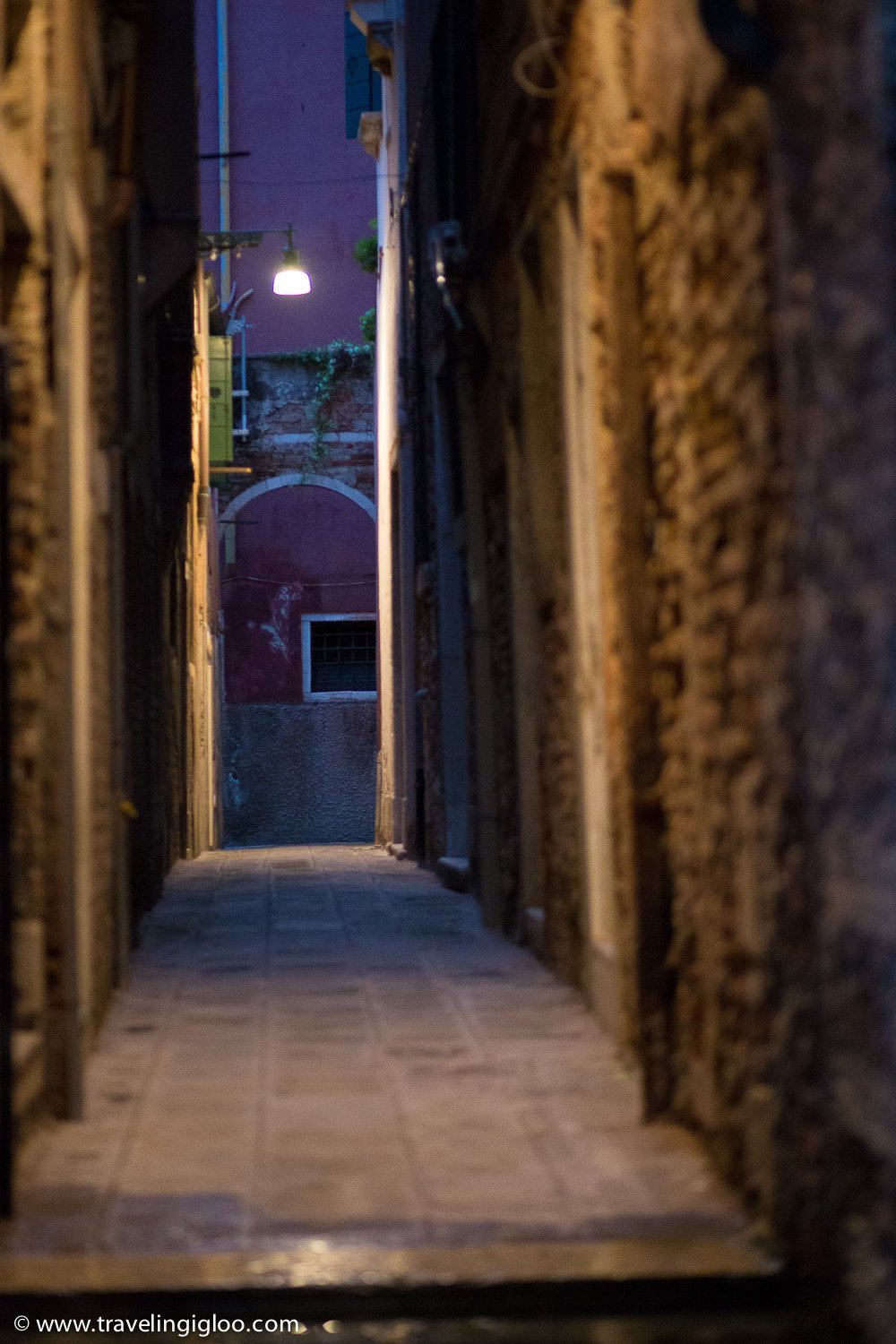 If you’ve never been to Venice before, it’s hard to see from photos but it is an absolute maze of winding roads and cobblestone streets that randomly seem to end without any warning. I guess I can’t blame them. It’s not as if the city had intentions of accommodating hoards of tourists in the future. We were there in May and the weather was quite perfect, much different from Lake Garda that we had just come from.

We stayed at a building dating back hundreds of years that used to be a palace. It was a home turned into a bed and breakfast and was run by a very sweet lady. My sister and I had a room and bathroom to ourselves and it was overall quite lovely. The lady told us a lot about the place and the area as well.

Our breakfast was simple; she made homemade bread for us in the morning and we had lots of fresh fruit available whenever we wanted. Also, she made coffee in an old fashioned Italian coffee maker (the Bialetti brand is the most popular) on the stove. It was really delicious. I’m a bit of a self-declared coffee snob and since then have converted to drinking coffee from my Bialetti. 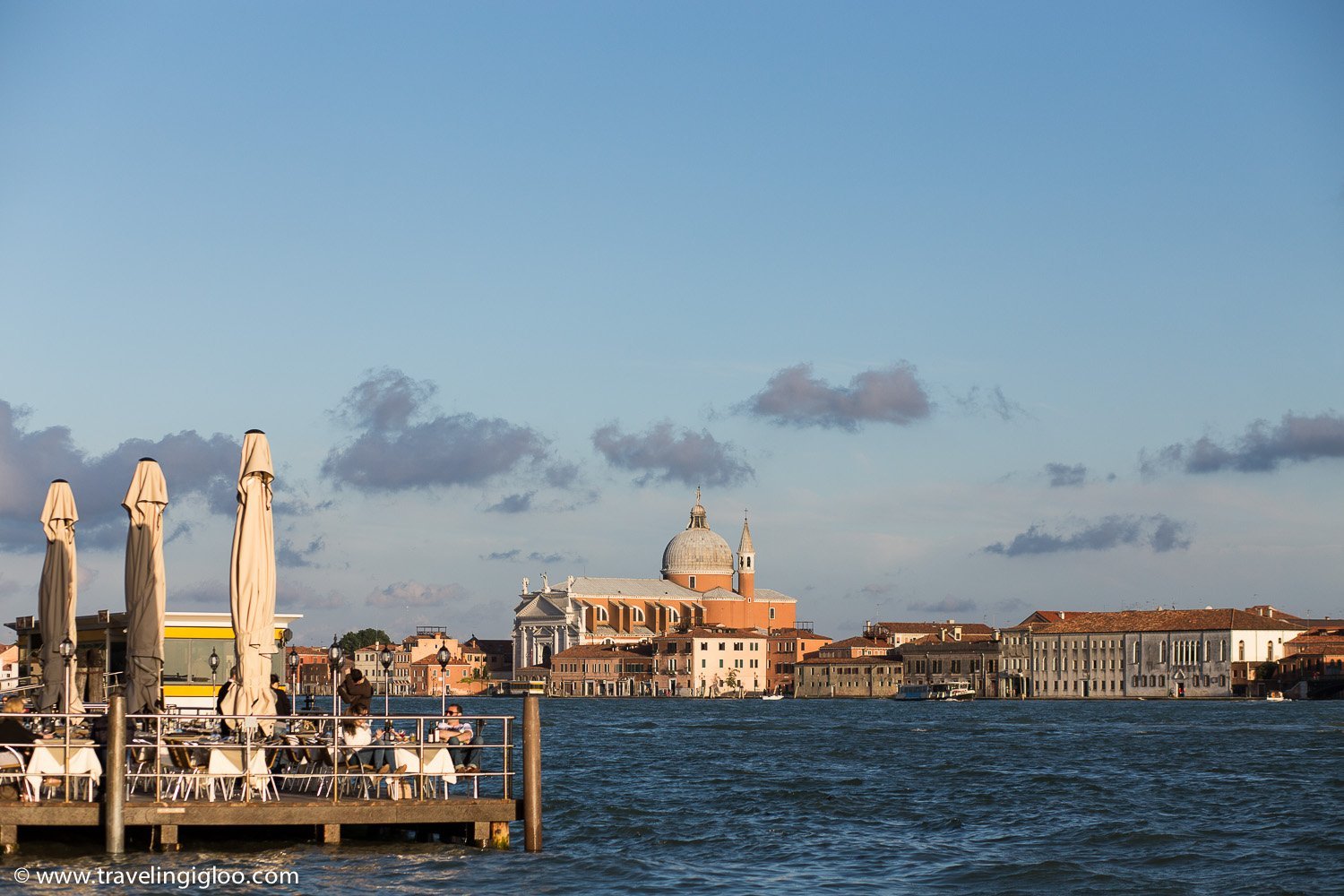 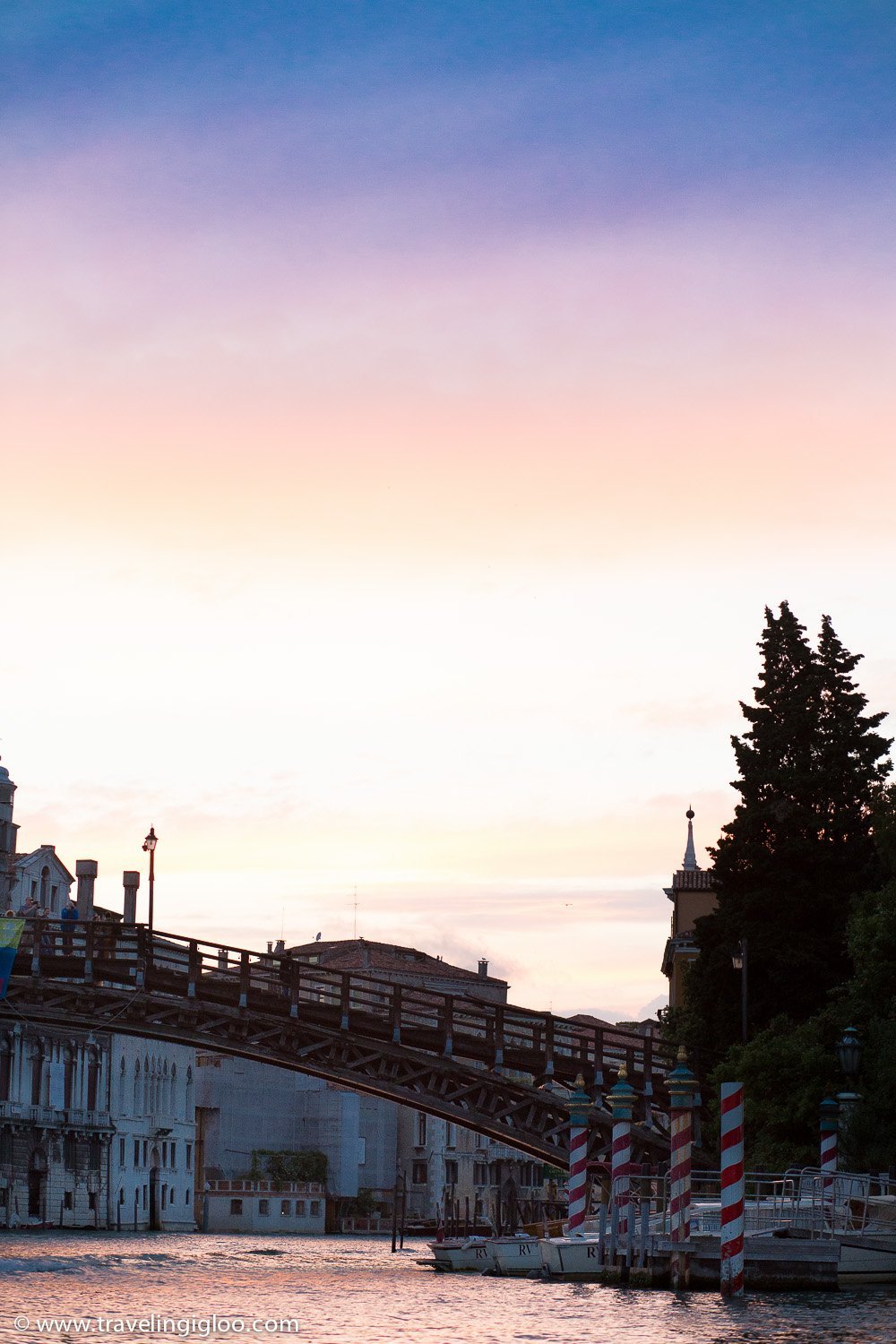 We only had two days in Venice to do everything. I’d actually visited when I studied abroad in Italy back in 2006, but wanted to go back and take better photos and play tourist to my sister as well. Coming from pristine Lake Garda, Venice appeared quite dirty. The streets had a fair amount of trash, and many areas smelled of sewage. This is likely really hard to avoid, but it was noticeable when we arrived.

But, the sights make it all worth it. Venice is truly a one of a kind city. It’s unfortunate that it is now overrun by tourists from all corners of the Earth, but who am I to talk.

Tip: To avoid the large crowds, I would recommend visiting in the off-season, between fall and early spring time (except for carnival, of course, unless that’s your goal!).

During midday we found ourselves navigating through the crowds and not really being able to enjoy much. It was more like we were trying to find a spot that wasn’t so cramped. At night the streets open up and walking around Venice at night has a completely different feel. Many of the streets aren’t very well lit so a phone with flashlight capabilities is helpful if you find yourself out late!

I love shooting at sunset when I travel. The light is fun to play with and the images turn out much more dramatic. They also look less like a typical tourist shot. I recommend playing with angles and looking for details, especially if you plan on creating an album for your trip. The mix of up close detail shots and cityscape or street shots evens out the look of an album.

If you’re unsure just what you should shoot, pop into a tourist shop and look at the postcards. That will give you an idea of what’s popular in the area. 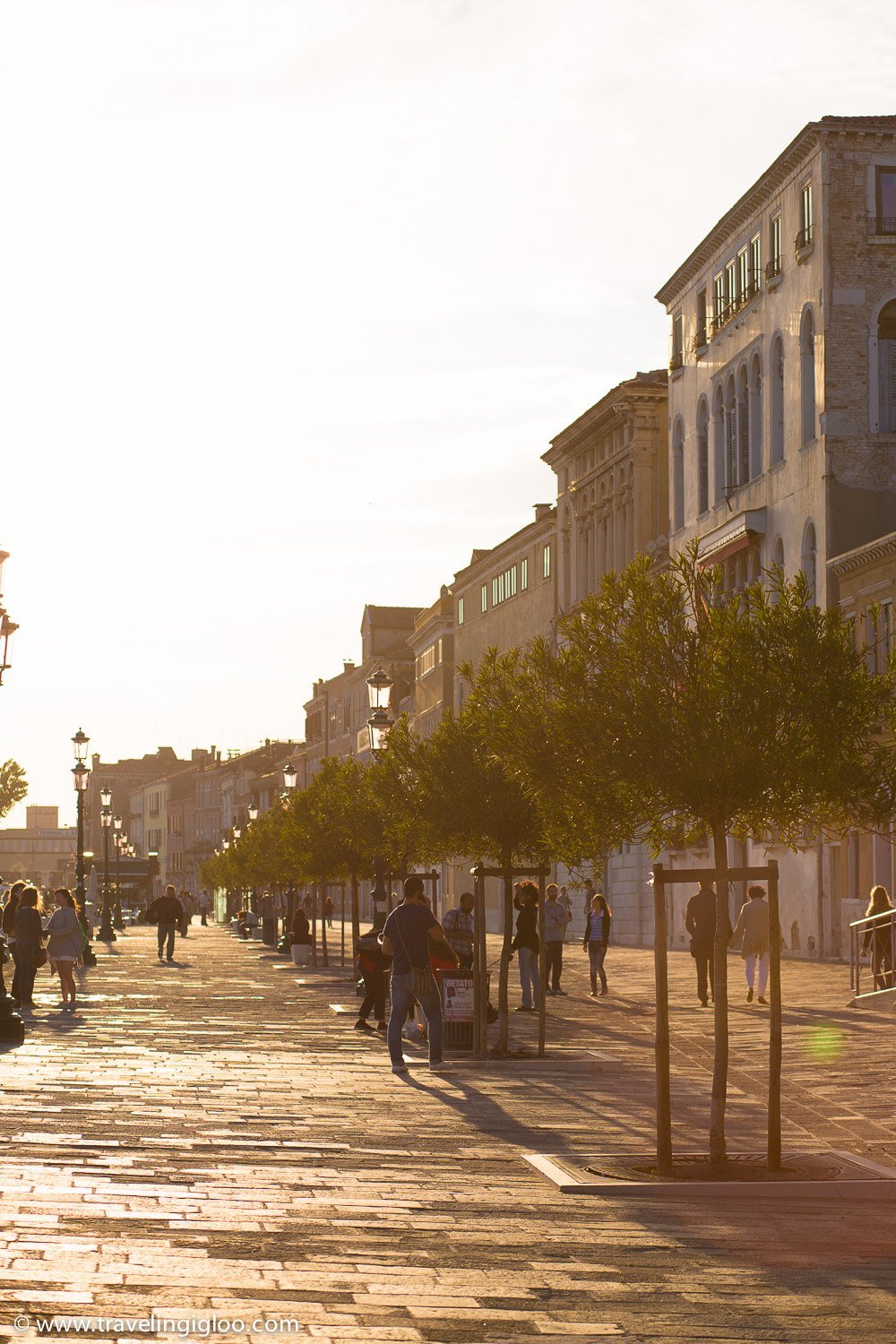 Below: All these VHS tapes were just sitting, unaccompanied, along this ledge and all over the trash can. 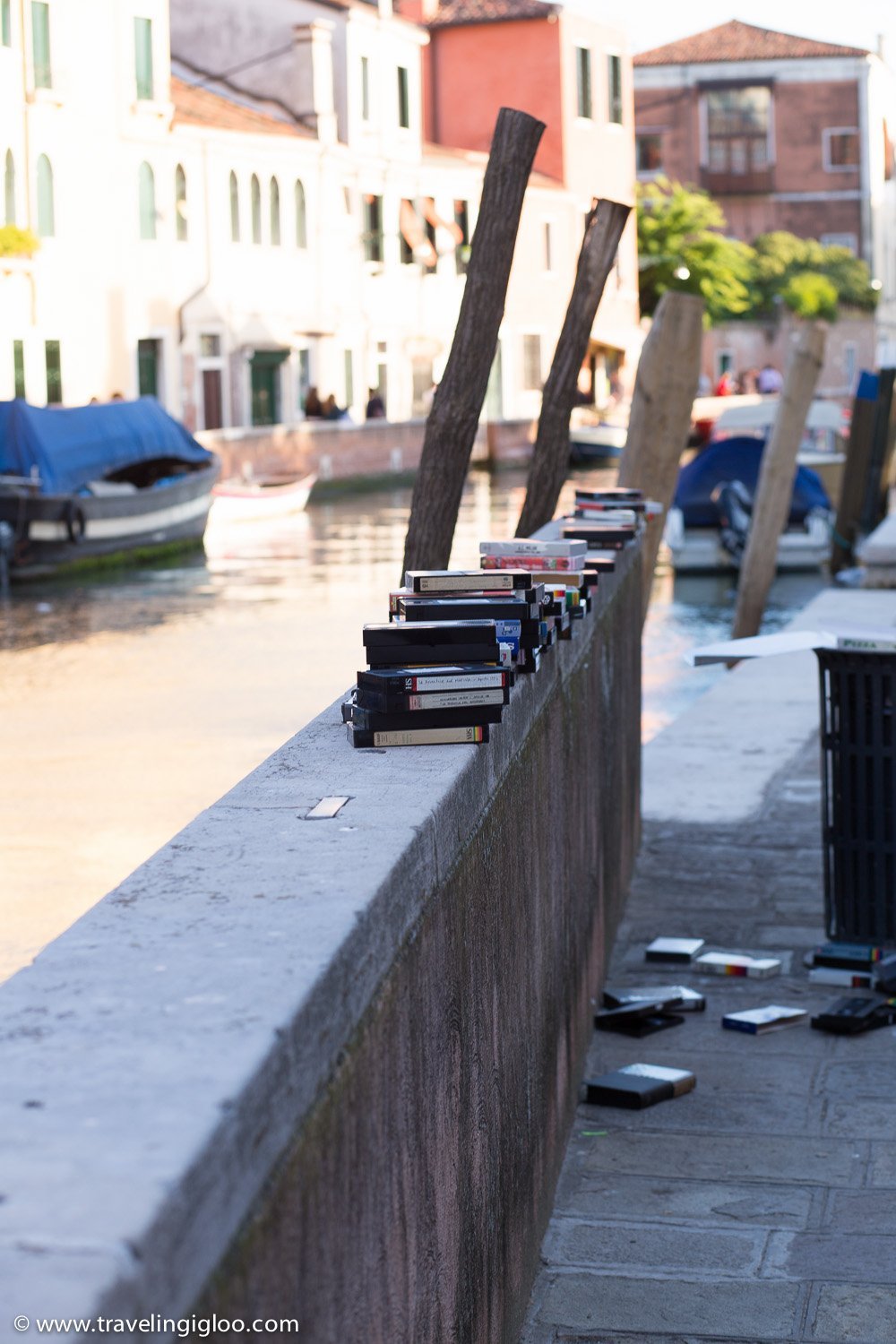 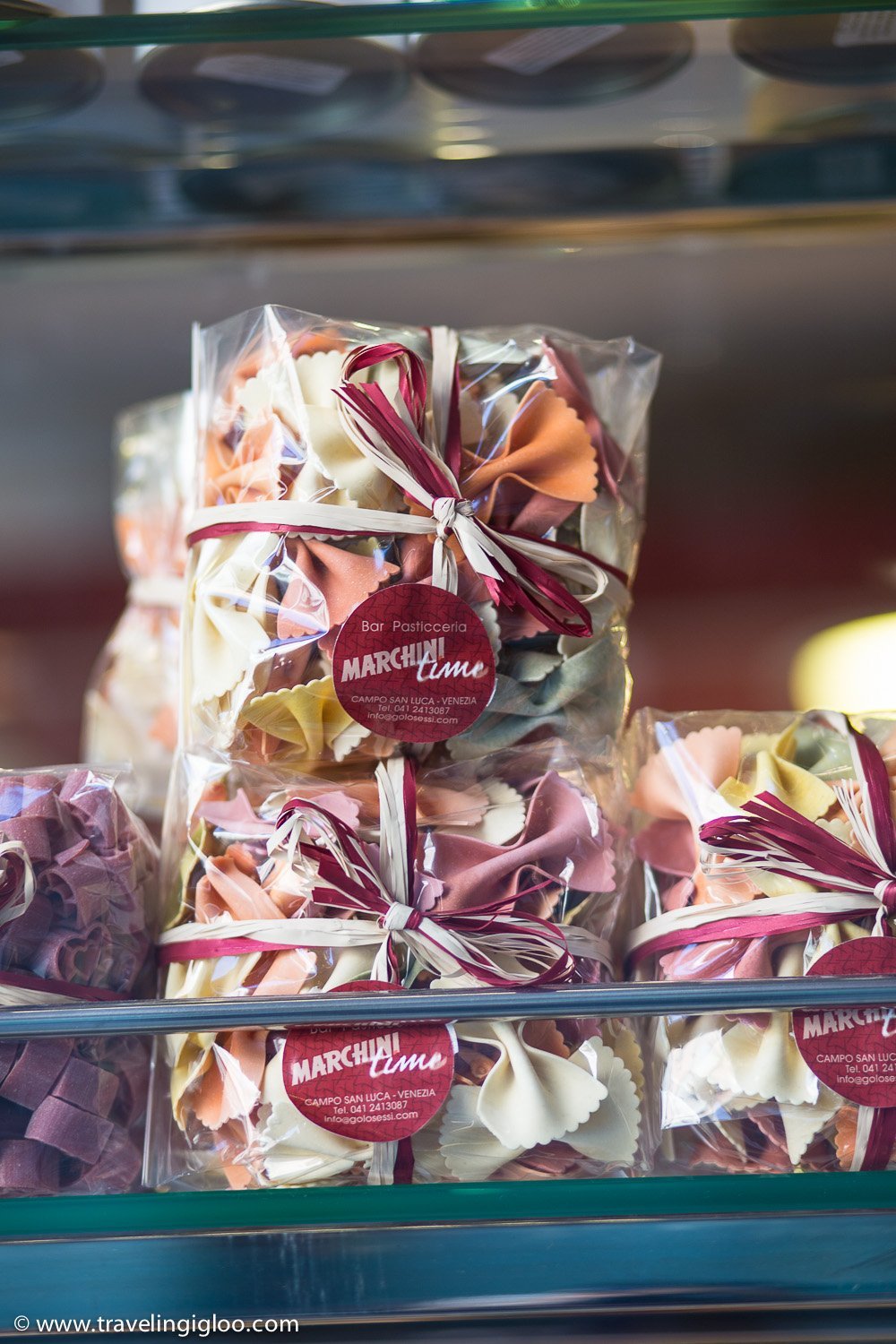 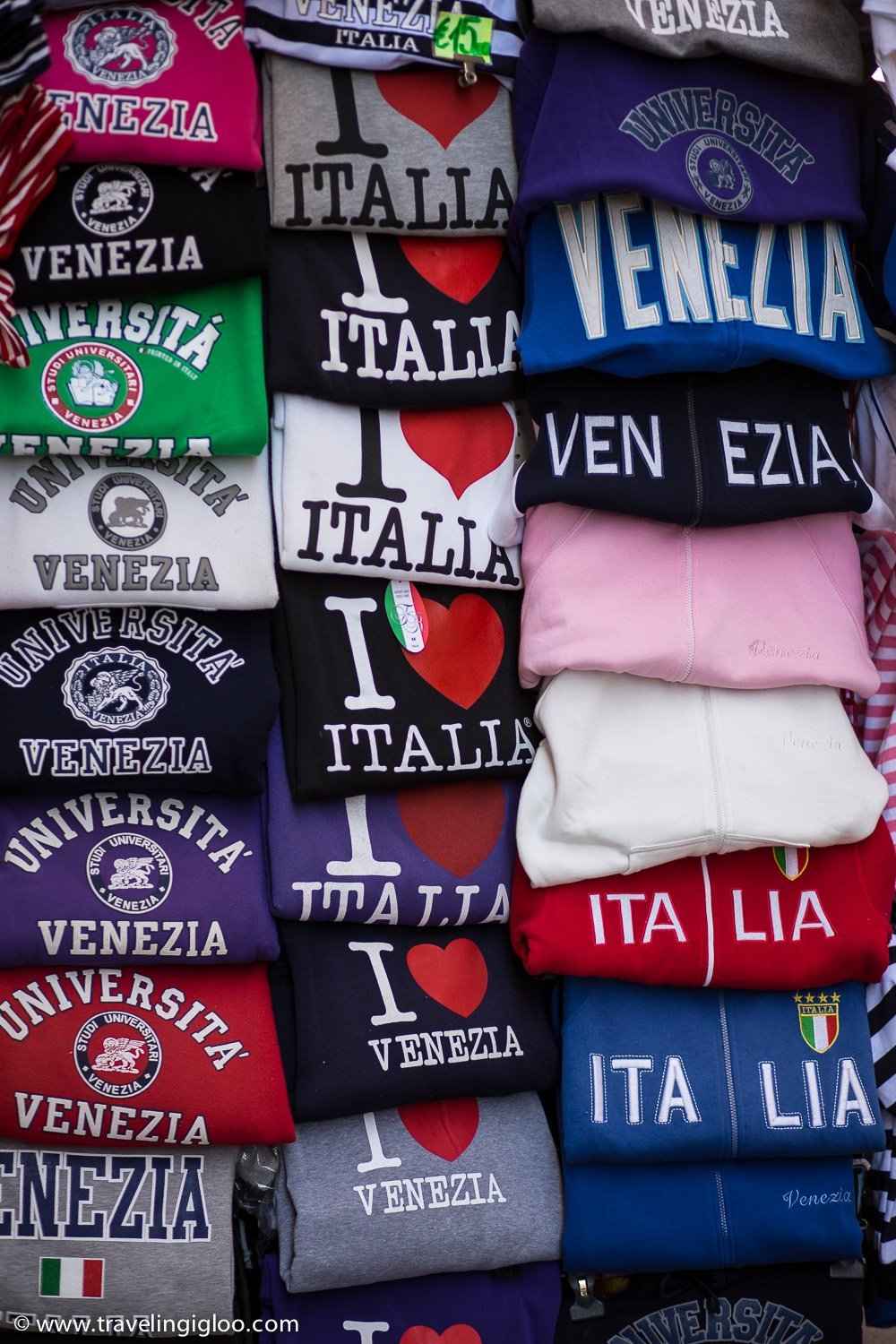 Visit Lido and the Beach

Many people may not know this, but there are a lot of islands surrounding Venice and many are worth a visit. Just across the way is one called Lido, and once you get off the water taxi it’s a 5 minute walk across the thin island to a long beach awaiting on the other side.

May must have been too cold for the Italians, because when we went it was empty! There were maybe 20 people on the entire beach. The umbrellas with chairs were empty, the bar areas was empty. It was quite nice! We happily sat in the sand and hung out there all afternoon one day. It was nice to get away from the craziness of Venice and relax on a sandy beach. So, we stayed out there under the sun all afternoon in complete bliss.

Below: This is the only image I have from Lido on the beach. As you can see, there really weren’t many people there at all. The sandy beach was a nice escape from the concrete and touristy area of Venice 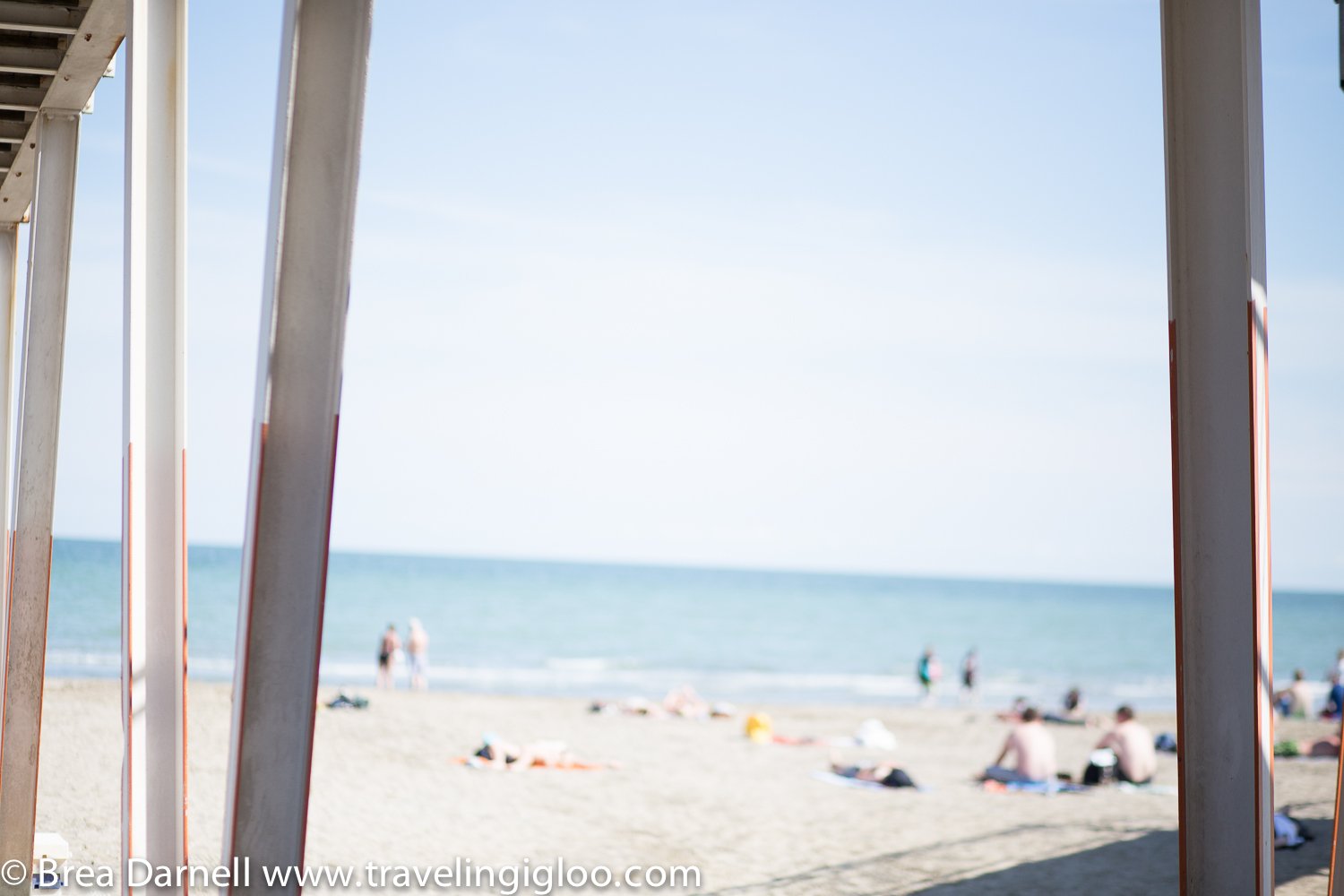 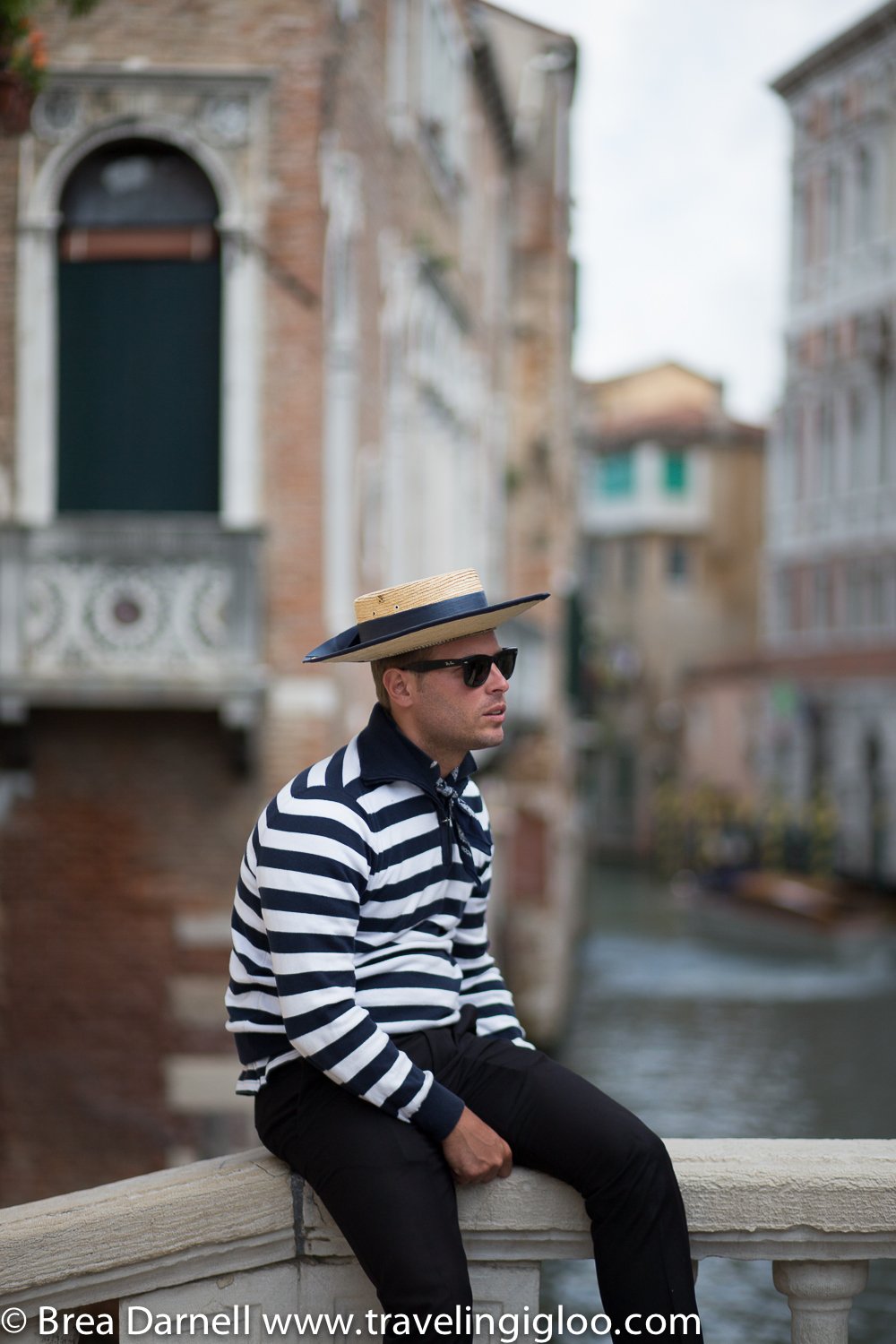 We were able to see quite a bit of Venice while we were there. I think we walked the island two times over. That’s half the fun of being in Venice; just wandering the streets and trying to get lost, possibly in a more local area. We did a tour with Viator one night and it was alright. We ended with a gondola ride that wove through the canals. When I studied abroad we did a gondola ride and at that time one of the students with us could sing opera, so he stood up and sang. Sadly, that didn’t happen this time.

It was nice navigating through some of the canals and is one of those must-do’s when you go to Venice. The tour guide showed us the college area of Venice. The bars have cheaper drinks and there’s more of a local crowd there. 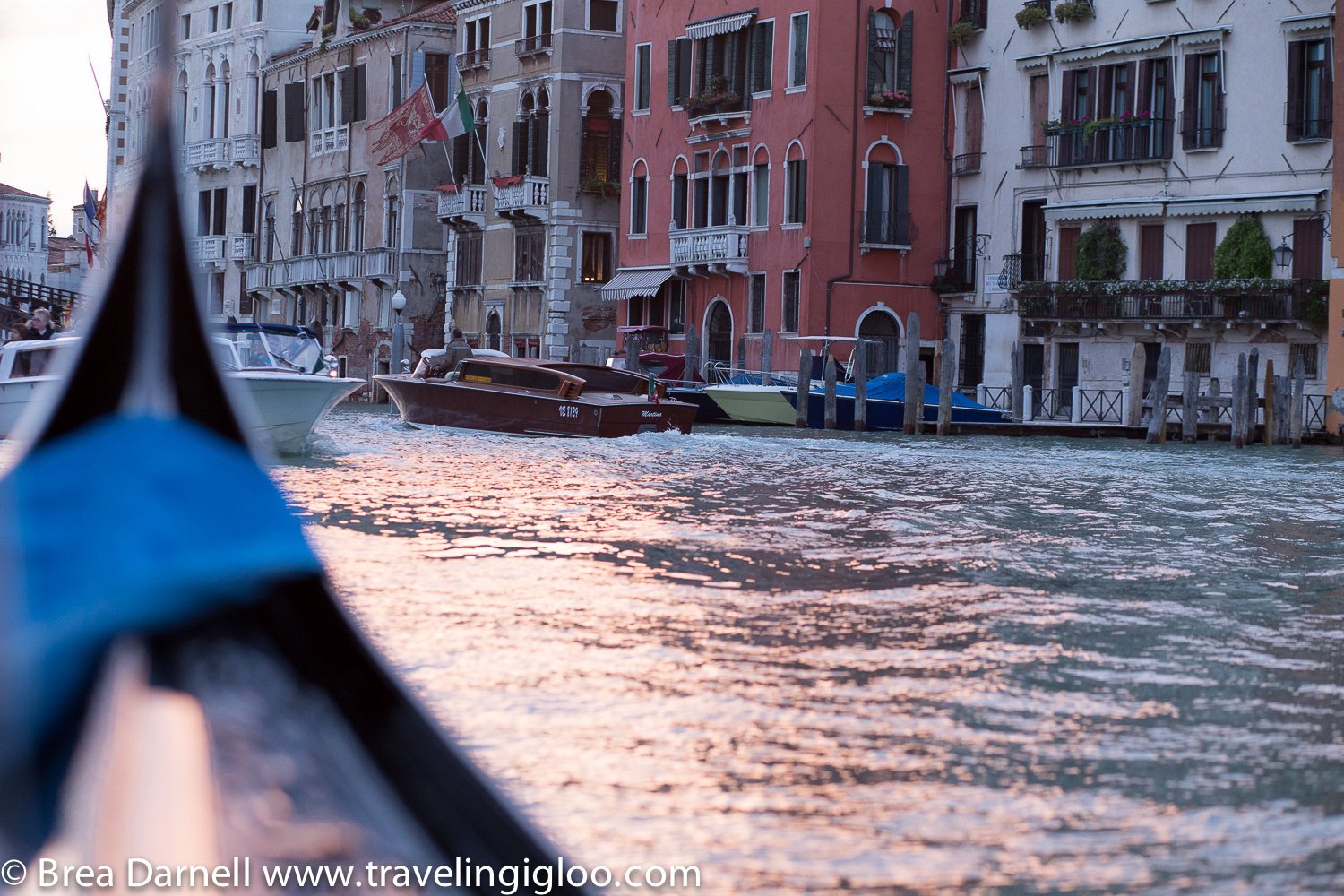 I think it was from all the recent flooding and rain we had, but St. Mark’s Square flooded every night we were there. Most people had no choice but to walk through it, and many people were playing in the water!

The second photo was taken hand held. I’m really impressed by how sharp it turned out for a night time hand held image. I LOVE my Canon 6D! 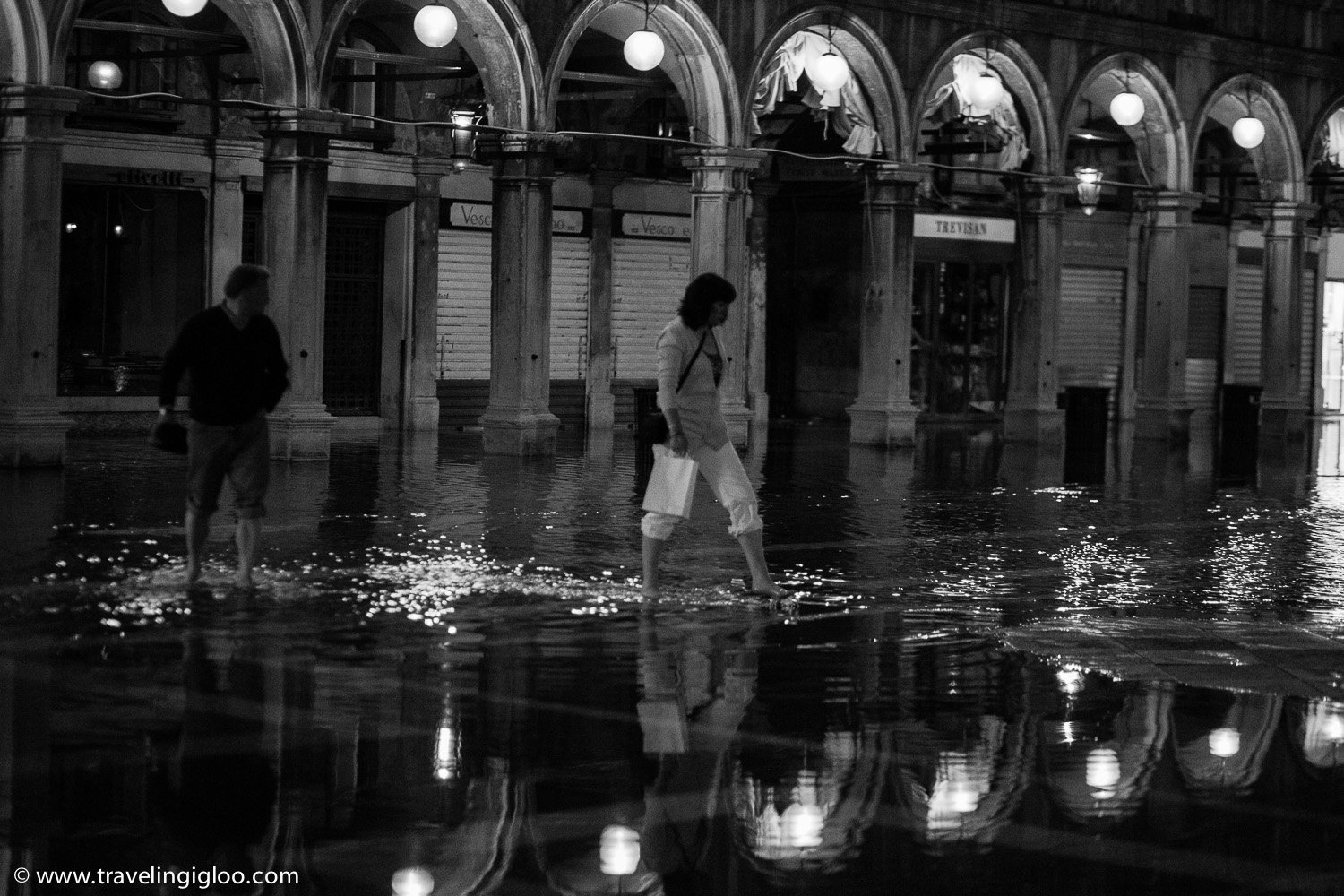 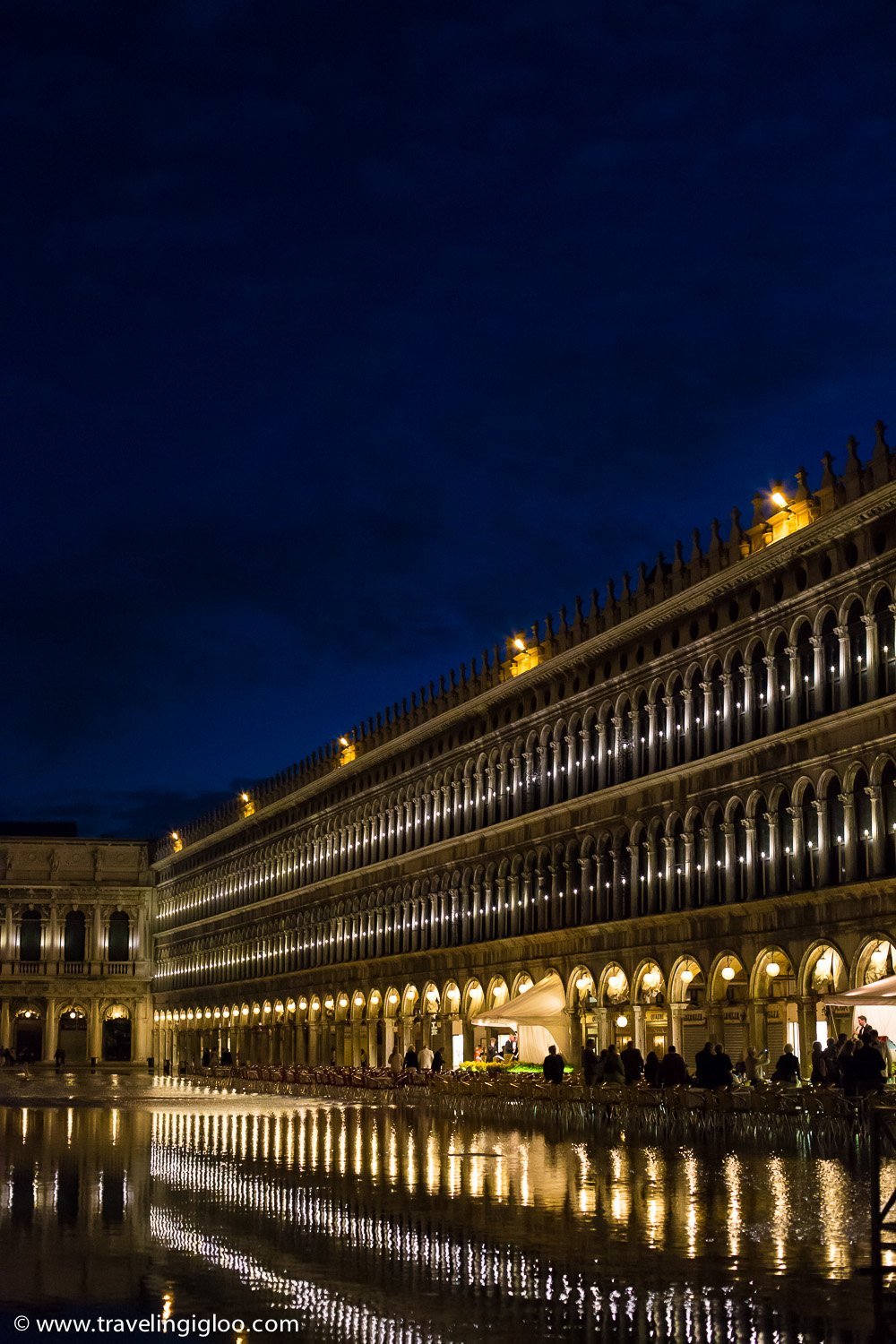 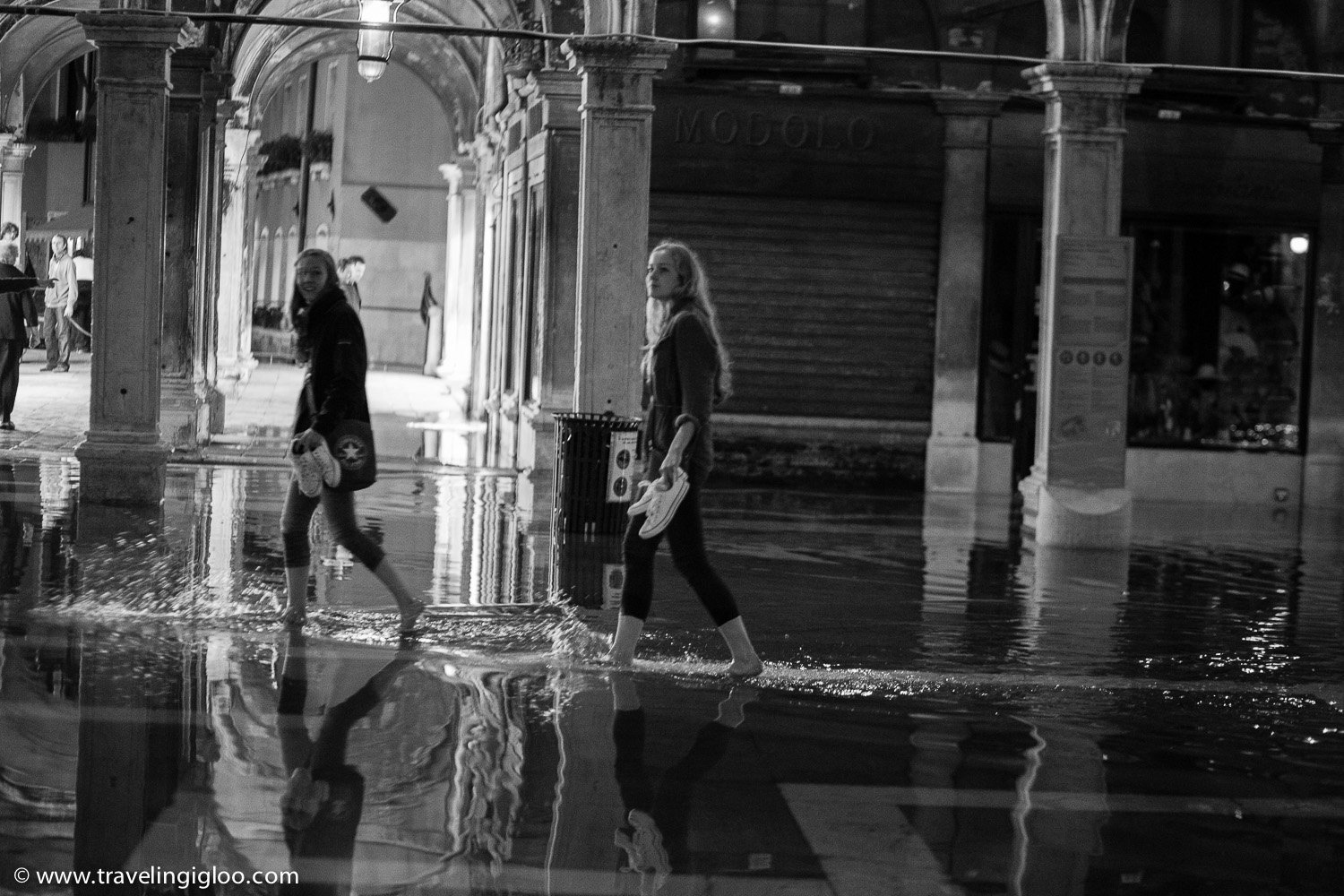 There were so many painter’s in Venice. What a wonderful way to spend the day… 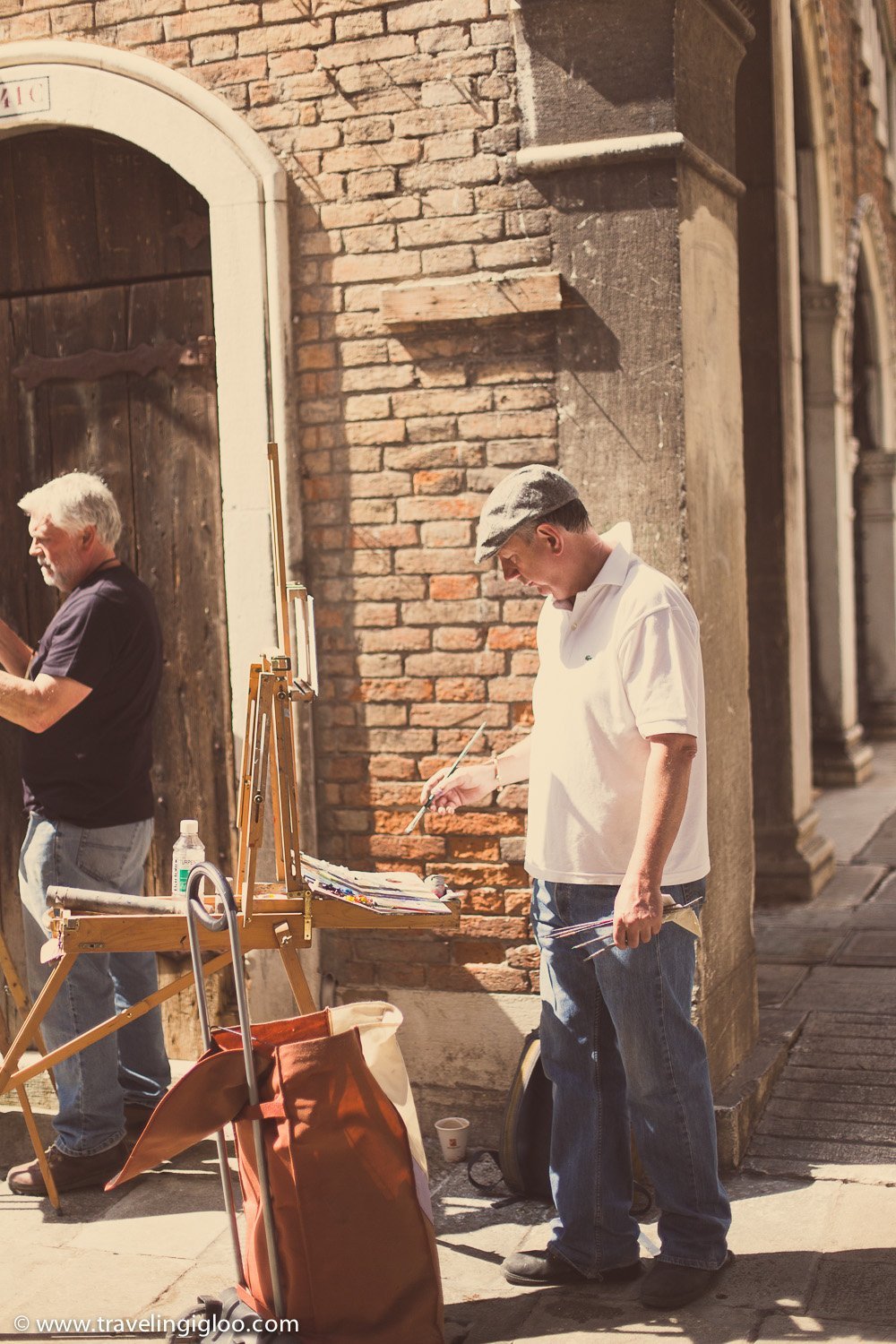 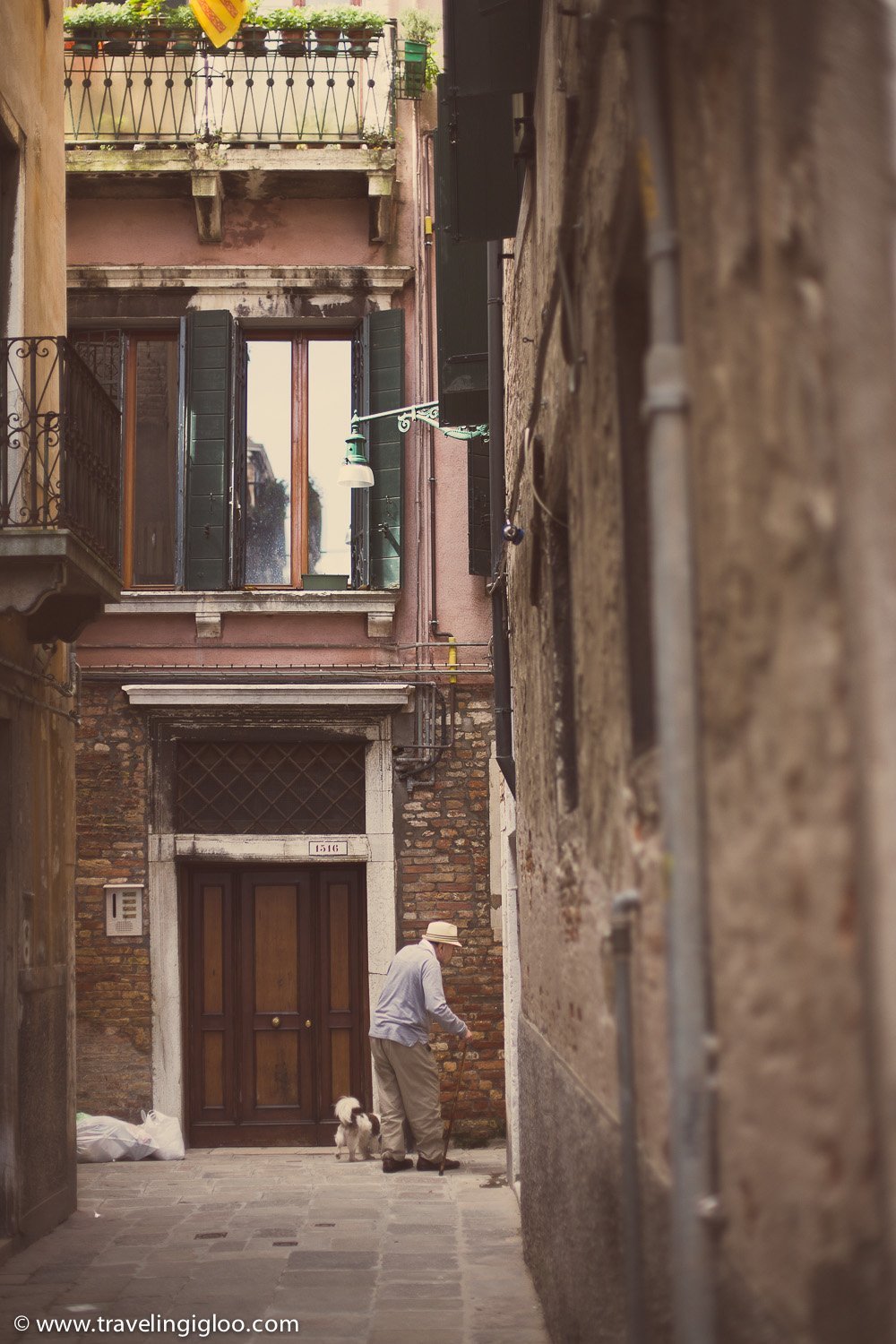 Overall, Venice was a really nice visit. The food was great, the seafood was the best and while I know it’s overrun with tourists, there’s nothing quite like it.

My Garbage Can Is an Unwanted Science Experiment